gita is a first-of-its-kind following robot that was designed with simplicity in mind.

The overall form of gita expresses its direction and movement. Its rounded shape is slippery when moving past and around people. Its spherical shape expresses its ability to spin in place. Despite its roundness, it has direction with a distinct front, back and sides. The front has a sensor array with prominent lenses oriented forward and to the side to indicate the field of view that gita uses to sense both the user who it is following as well as bystanders.

Its two motors drive the right and left wheel at different speeds and directions and allow a zero turning radius; it leans forward before it takes off and leans back before it stops. Self-balancing and its large wheels are what gives gita the ability to move quickly and nimbly enough to keep up with people. 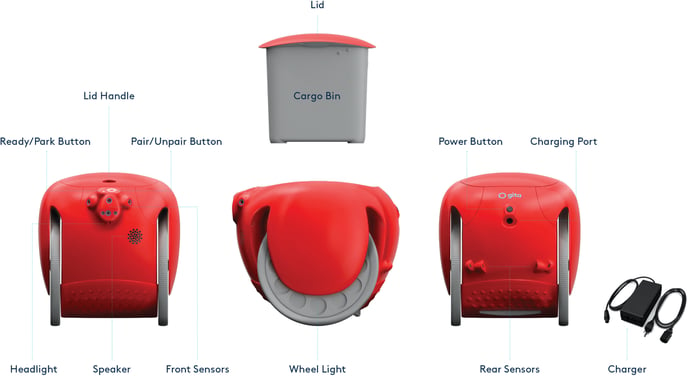 gita’s exterior panels are constructed from a PC/ASA (polycarbonate acrylic-styrene-acrylate) providing excellent durability and protection against the elements. The plastic body is resilient but deformable and makes it smooth and safe to be around.

The individually driven molded plastic wheels use tires constructed from materials commonly found in the soles of sneakers to cushion the ride and protect the contents inside the cargo bin.

The lights change their color, brightness and pulsing rate based on the specific mode and status. In combination with eleven custom-designed sounds gita communicates with users and bystanders in a simple and straightforward way.

gita's front sensors consist of two types of cameras. One pair of cameras are arranged as a "stereo pair" which give gita the ability to sense and measure the distance to objects, including the leader. The other three cameras are color CMOS cameras arranged to allow gita to sense all around. With these cameras, gita can detect different shapes, sizes and colors. This allows gita to better "lock on" to the leader, and to track them farther to the sides than the stereo pair can alone.